Could today be a tale of redemption? A good part of today’s route featured on Stage 18 of the 2017 Tour too and is memorable for me because I did not enjoy it nearly as much as I should have done. Essentially, I think I was just getting tired and this was the last of the mountain stages that time, rather than the first of three back-to-back big climbing days. The climbing starts early today and we rise to over 2,000 metres three times, so the trip to Valloire should be quite a different story this time round and hopefully will not be a time for tiredness and grumpiness!

Well the good news is that redemption was achieved! I enjoyed today, even though it was by far the toughest physically. Mentally I was in a good place too and overall this scored a 9 rather than a 10 because compared to Stage 15 I got home in the light and in time for dinner!

After an initial ride along the lakeside, today was all about climbing and descending. I don’t remember the Col de Vars from two years ago, but Strava shows I’ve been there so that’s good enough for me!

Izoard was next up and this is now the third time I’ve climbed it from this side. Given that we were aiming to finish the ride by 9pm so that we could get dinner, taking more photos of the same thing seemed less important, though I still managed a few. Oh, and I beat my best time up there by 3 minutes (58 minutes total), so that’s pretty good going after the Tour we’ve had so far.

Then it was time for the Lauteret. This is the second time I’ve climbed it, but this time into a strong headwind, so unsurprisingly the 24km climb took longer than before – a lot longer (20 minutes)! Never mind, a quick pit stop for an espresso, a full fat Coke and a Mars bar and I went well up the last 8km to the top of the Galibier. After that, it was just a 20km descent into Valloire for shower, food and bed.

One final thing. On tour, as well as the “rider of the day” award given out by our lead rider Emily, there are two other awards that are decided by the riders currently holding them. So the chapeau is awarded for noble acts while the unicorn (an annoying squeaky toy that has thankfully lost its squeak) is awarded for stuff such as acts of stupidity or bringing cycling into disrepute. Last night the unicorn was passed to me on the basis that I had been wearing a Bath Rubgy cycling jersey! The logic for it made no sense to me so I shall exact my revenge when I pass on the unicorn, which couldn’t be tonight as we are using more than one hotel and people are coming in late. I should explain that the person who gave me the unicorn was awarded it because of the horrific nature of his own Bath Rugby kit while mine had attracted a lot of positive comments when I wore it in Pau! 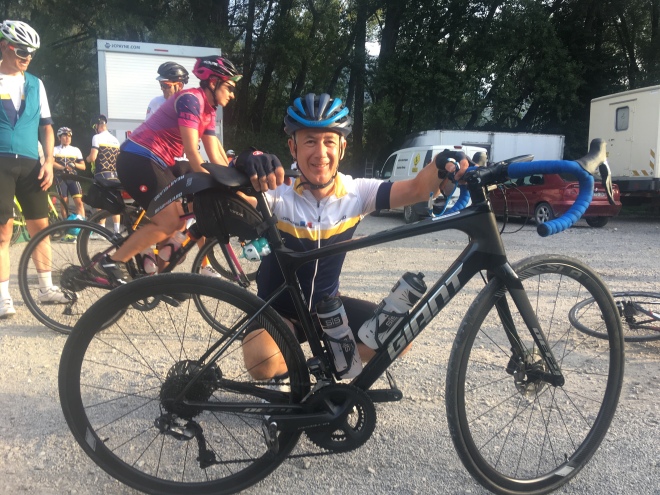 Regardless, I have taken it on the chin and sported the unicorn on the back of the bike all day!

That’s the end of the long stages though not of the mountains. Two 130km stages to go in the Alps before we can dare dream of Paris.

2 thoughts on “Stage 18: Embrun to Valloire”