Hugs and kisses from Babs: at least three, probably more!

Rambouillet is the lucky winner of the annual battle to secure the rights to host the start of the final stage into Paris. Our route will likely diverge from the pro route simply because for them it’s just a short hop to Paris where they will then tear up and down the Champs-Élysées eight times. We will have a gentle meander through the Parisian suburbs before doing just one lap on a busy Sunday afternoon thank you very much! Then time to open the champagne, if any has survived from Épernay or Reims!

On Stage 15 we had a four hour transfer before riding and today we set off at 5:30am from a hotel at Lyon airport in order to be able to start riding by 1pm! At least today’s stage wasn’t going to be difficult. The race distance is 127km, but with time pressure and a few extra km in the bank from previous stages, 85km was plenty for us and meant that we at least mostly followed the official route into Paris.

After lots of dozing on the coach, we had a relaxed roll-out from Rambouillet, going through pretty forests again as if we were still in the middle of France somewhere. The smell of the pine forest was lovely – much more so than the scent of the cyclists’ shoes in front of me. I’m probably just as guilty of contributing to that! A reminder that all my kit needs a good wash!

We had lunch after 35km, from which point it was time to make our way to the Eiffel Tower. I loved this part of the ride because I knew that at the end of this section I would see Babs waiting for me. Her arrival made the day and the Tour as a whole something really special and when we met the sense of fulfilment was so much more complete than when I rode this event in 2017. Plenty of sweaty hugs and kisses!

We hung around until all the riders made it to the Eiffel Tower and there was quite a throng of family and friends there to meet them. Then of course it was time for the obligatory group photo.

Enterprising vendors were hawking cold beer, champagne and wine to those in the mood to celebrate, which of course most of us were – but only to a limited degree as we still had a lap of the Champs Élysées to complete before reaching our final destination.

Cycle lanes have been installed on the Champs which made that circuit far less harrowing than it could have been (though the Arc de Triomphe roundabout is always a special challenge). So, down the Champs, under the tunnel and back up past the official finish line before getting to the hotel. 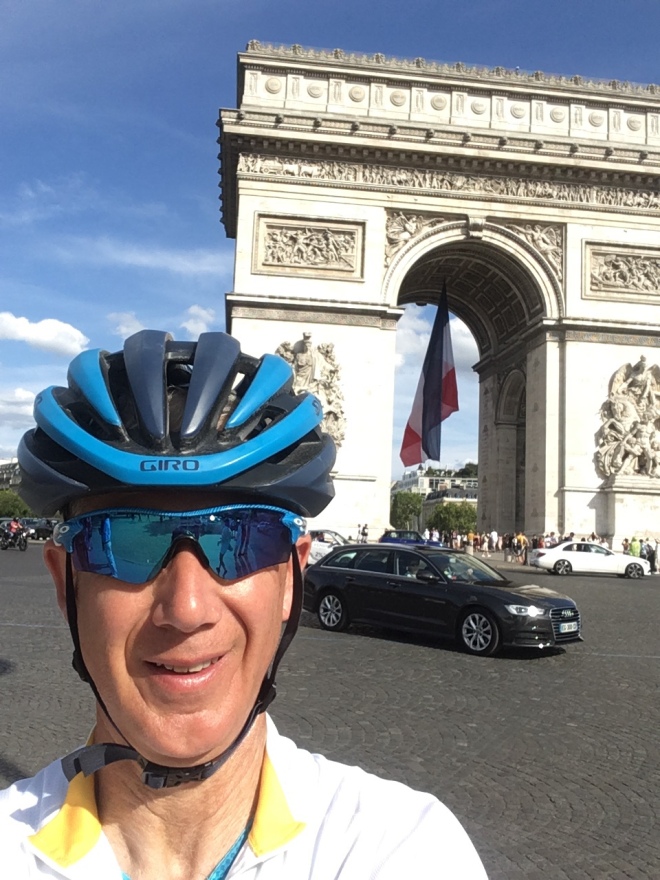 Shower, change and then some non-sweaty hugs and kisses!

Party time! Two coach loads of riders, friends and family taken to a Bâteaux Mouche for a celebratory dinner on the Seine. Much mutual congratulation in evidence, but I think we’ve earned the right to do that.

It’s been a special time with special people, with some of whom I have ridden this twice now. What a fabulous opportunity we have had and I hope that what we have done (raising £335,000 for the William Wates Memorial Trust) will really help to provide opportunities for those in not such a privileged position.