Embrun is apparently the driest and sunniest city in the area. It has certainly been one of the hottest! If you’re not an out-and-out roadie like me then there’s all sorts of very long distance triathlons and the like that you can do here. And of course if you get all hot and sweaty, then we end up among the “savon de Marseille” soap factories. The Patrouille de France are based here – French Red Arrows – I was hoping for a fly-past to celebrate our near-completion of the Tour but did get to hear one jet so I’ll take that! No categorised climbs after today so we’re on easy street now.

Another long, hot day in the saddle today as we said goodbye to the mountains and headed south through Provence. Ultimately this was the third 8pm arrival on the trot, but at least this time there was time for a shower before dinner and it was good to feel human again!

We had a few punctures among the group today which put us towards the back of the pack. We’ve been fairly lucky on that score but that ran out today!

We actually rode 234km in the end. We have ridden more than the pros will and it’s tempting to skip a bit, but it will be all aboard the coach to Marseille tomorrow.

It was Bastille day, so as well as less commercial traffic I was expecting to go through towns and villages with holiday activity going on. Maybe more towns in bunting or little festivals. However, what was notable about this route was the almost complete lack of habitation! We did find one café that was open when we most needed it in the later afternoon though. 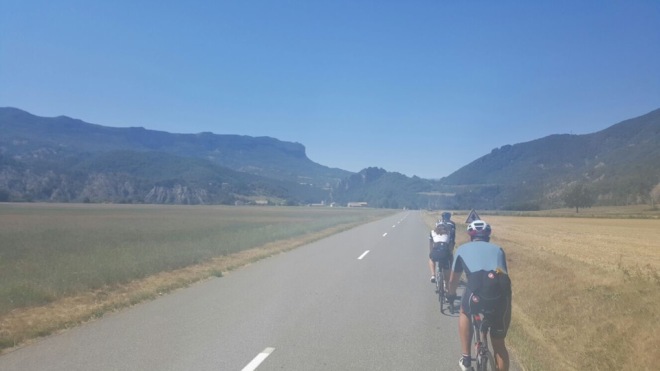 After the last feed stop I set off first from a group of 15 or so, expecting to be passed fairly soon as per usual on the initial downhill stretch. Somehow I stayed away. It would have made sense to sit up and let the others catch up to me, especially as it was really windy on the final flattish run in. But I sort of went into time trial mode and went for it! We have a time trial tomorrow, but that is going to be a “café ride” as there is no way we will be able to race that.

Not much else to say about today other than “job done” and there will be no more late finishes on the bikes which will be a welcome relief.

On that final run “home” to the hotel I got to thinking about going home properly. It’s been great on tour and the next couple of days will be good too and I wouldn’t want to miss them. But I’ll be ready to go home now, to be with Babs, to see my boys again, to sleep in my own bed, to not have to live out of a suitcase, to eat spicy food (chilli con carne for tea on Monday – woo-hoo) and to maybe clean my bike properly. I will go for a ride at some point, probably a club ride next Saturday but I’ll be in no rush. You never thought you would hear me say that now did you!

This was the longest stage of the Tour and with the heat and finally the wind, this made for a tough day that was tempered by lots of easy cycling.