Pastis country, if you like such things (which I do!).  Blagnac is on the outskirts of Toulouse where the Airbus is assembled. I used to have Airfix kits. Rodez is in the middle of nowhere – I once missed a connection here and “slept” on the station bench until the first train out in the morning. I was a student then, so it would not have occurred to me to take a taxi into town and find a hotel, where I might have seen the famous gothic cathedral too.

As a post script to last night, after publishing my blog I joined the others to dip my feet in the water. 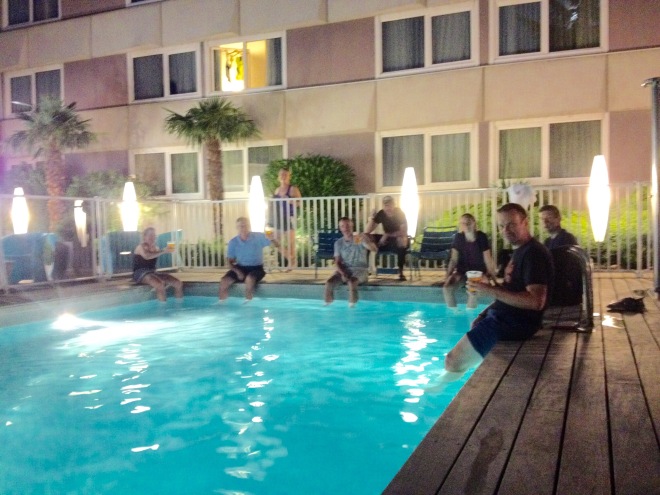 Today was respite after two tough climbing days – a long flat stage in cooler temperatures – and was very welcome. We are looking forward to just one more day in the saddle tomorrow before we get to our second rest day. In truth, it’s going to feel like our only rest day, given that we had such a small amount of free time last week – out of necessity of course.

Flat surface, but along tree-lined avenues where we were able to get back up to our typical cruising speed of 28-32 kph.

Yet another nice place for a feed stop. I know I need to keep eating a lot to replace all the calories I am burning, but I’m wondering whether I am actually managing to put on weight at the moment!

We had some fun on the ride today. Shortly before the final feed stop I saw a wide, undulating road in front of us and, although it was supposed to be a day that we took it easy, I decided to let rip and fly off the front, using momentum and a high gear to get down quickly and then spinning away to get to the crests. I had thought that the feed stop was only a short distance ahead and so going for a quick blast was not going to upset the group. But I misjudged the distance to go and there was another short Cat 3 climb to come first! Rob had caught me by this point (well, I let him!) and together we raced up that climb, though I blew up about half way. That was enough fun and I don’t think I’ve damaged myself for tomorrow even though we have a fair bit of climbing to do again.

Actually, we did have a bit more fun because we decided on a feed stop 4.5 and dragged other riders into the bar as well!

This was not the quietest of spots, but a great place to cheer on other riders as they went past  – if they weren’t joining us that is. Now don’t get the idea that this is just a booze cruise!  We were only 8km from home and want to enjoy our time on tour too, though you have probably worked that out! 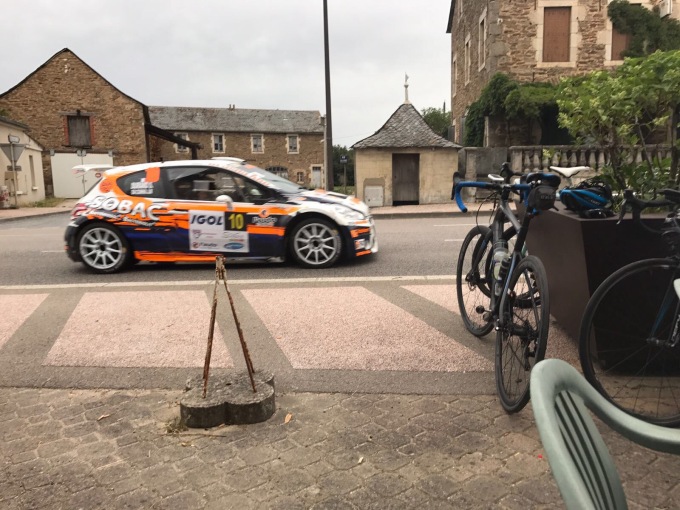 The reason for the noise was that there was some kind of car rally going on.

I have mentioned two out of the three nightly awards that are given out, the chapeau and the frog (for noble and ignoble deeds respectively). Tonight the “rider of the day” award went to Emma who is here for four days and is riding with us. Emma really deserves this award because not only is she the youngest rider that has been on tour (she is 19 and very strong) but because she has been putting up with us – five dads, a mum and a weird uncle!

I’ve scored my suffer score slightly higher than Alex, largely because of my stupid attack at the bottom of the last Cat 3 climb. It was fun though!