Before I knew I would be riding the whole Tour in 2017, I had decided that my main challenge for this year would be to ride on the cobbles of Paris-Roubaix. The full pro race is around 250 km, starting from Compiegne (north west of Paris) incorporating 27 sections of cobbles totalling some 55 km. The day before the pros race, amateurs could choose to ride either 70km, 145km or 172km in order to experience some of the “Hell of the North”, one of the five “monuments” of cycling. I chose the middle option on account of the fact it started and finished in Roubaix, rather than needing to spend 1.5 hours on a coach to Busigny, where the longest of the challenges starts. That’s something I can do without, as there will be plenty of transfers to endure when I do the Tour de France! The route I chose still had 18 cobbled sections, totalling some 33km and included the iconic sections such as Trouée d’Arenberg and Le Carrefour de l’Arbre.

Weather conditions were good, meaning that the course would be dry and dusty, not wet and slippery, so that was in my favour. I had opted for slightly wider tyres than I would normally ride (28mm) and did not inflate them as much as I normally would in order to attempt the limit the bouncing (80 psi). I think it worked in that there were no problems in the saddle area – issues came elsewhere!

As we were starting in Roubaix and only joining the longer Paris-Roubaix challenge route after 51km, this meant a fast-paced ride out on clear, smooth roads and the opportunity to join other groups of riders. My pain would be experienced solo later in the ride. I started just before 8 am and once out of town it was misty first thing until the sun won through. So for the first few km I could only smell the muck-spread fields rather than see them!

I’ve experienced the cobbles that feature on the Tour of Flanders and expected these ones to be worse. I was not disappointed! First up was the Trouée d’Arenberg, 2.4km of cobbles that were graded a 5 star difficulty rating (out of 5). What a baptism! I hit the cobbles OK, remembering what I had been told about selecting the right gear beforehand and maintaining momentum. What I had not anticipated was that I would be unable to see properly – this was because my eyeballs were bouncing around inside my skull! Despite there being smooth sections of tarmac alongside the cobbles (which a good number of people were using), I was determined to see this through to the bitter end and was thrilled when I did so. I thought this augured well for the rest of the ride, given that there were only three 5-star cobbled sections in total, so the other 15 must be easier right? Well they were, sort of, but not by very much. The only real difference between 2-star and 4-star sections was the length I think, or at least it felt like it.

The next cobbled section was shorter and went OK, this time with perfect vision. Half way through the 3.7 km third section I realised that I was already starting to get blisters on my hands. This was not a good sign. My normal riding position is to have my hands on the hoods, not the bars, and I think my failure to go straight to the bars may have caused the problem – or at least brought the situation on earlier than it otherwise would have done. Oh well, there was not much I could do about it now but to grimace and bear it. In fact, in most of the photos that were taken of me during the day it’s clear that there was a lot of grimacing going on!

Over the next few sections I stayed mostly on the cobbles but did go for some occasional respite by riding along the side. In fact, riding on the hard-packed earth alongside the cobbles was almost as difficult most of the time as it was rutted, narrowed at times, and there were quite a few holes too. My honour drove me to stay on the cobbles as far as possible though, rather than copy the many who took whatever advantage they could. As the day wore on though, I was happy to start compromising a little more!

The feed stop provided welcome relief for a while. 6 sections down, 12 to go. I was making reasonable time, but I was staggered by the speed of the people who were able to fly by me. During the next sections I tried to push harder in order to get the pain over and done with quicker, but I clearly lacked the strength and/or technique and perhaps the sore hands were hampering me too, though the blisters weren’t giving me grief when I was riding on the bars.

One flat field gave way to another flat field and each of them had another long stretch of cobbles with which to contend. These sections were coming thick and fast now, with only a handful of km between each of them in which to recover. And even then we were faced with a headwind to impede us in another way. You could see the foreboding sign marking the start of a new section looming in the distance – a sign to start mentally preparing for the next assault on the body. There was also another 5-star section to negotiate during this period, but eyeballs stayed in place this time.

Another feed stop, then the final 7 sections. The third last was Le Carrefour de l’Arbre, the last of the 5-star killer sections. I had pretty much had enough by now and was so pleased that I had not gone for the 172km route as I would have reached that threshold much sooner! To start with I could not face bouncing around on cobbles again so stuck to the sides for a bit, then stopped to admire the prowess of those coming through and to try and record what the road looks like. I was pretty exhausted by this stage.

Two more sections to endure, and then the merciful relief of knowing that there was just a few km of smooth roads to go before the end. I was happy, but not yet relaxed because the ride finishes in the velodrome. I’ve never ridden in a velodrome before and the last thing I wanted was to get it all wrong on the banking and end up in a heap! Entering the track was OK in the end and I soon moved to the flat on the inside – safety first after I had come so far. I felt triumphant crossing the finishing line. No mean achievement, and although it’s always possible to wonder “what if” with respect to how I could have done things differently, it is not one I shall be repeating, but don’t let me put you off! 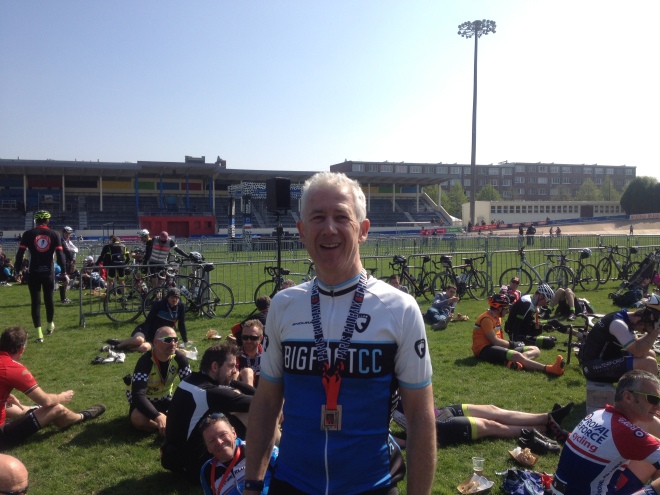