Lac de Payolle sounds very carnivore, with its Campan lamb and garbure. The latter is not as bad as it might sound – it’s meat and cabbage stew. OK, so maybe that does not seem so very enticing. There is some local blueberry jam to taste afterwards though.

Deep into southern France now and nothing but the sound of silence and the gentle humming of the wheels as we started climbing the Aspin. The roads had been reasonably busy until then, but nothing like yesterday.
A tour like this examines you both mentally and physically.  Looking back now I realise that yesterday I had to dig fairly deep physically, though to a lesser extent mentally. This morning started with a different type of physical self-examination, following which Gary decided to wear two pairs of bib shorts. I won’t give any further explanation, you won’t thank me for it.

It comes to something when we describe 162 km as a short ride, but that’s how we see it in comparison with the others. This allowed us to do a second transfer after the ride to get to Pau, the start point for tomorrow. This will enable us to get away early on what will be the first of two monstrous days.  We had two buses arranged to pick us up and I was fortunate enough to arrive well on time for the first one, giving me more time to sort myself out this evening. I didn’t see Gary all day and he’ll come back on the second bus. I know that this is because he is managing his effort, his knees are still not right and he is looking forward to the rest day, when I fly home. Otherwise he’s fine and riding well, as you would expect.

(Update: Gary was lead astray by others and ended up doing extra mileage before being picked up and dropped off where he should been. As Gary says, at least he will beat me on Strava now!) 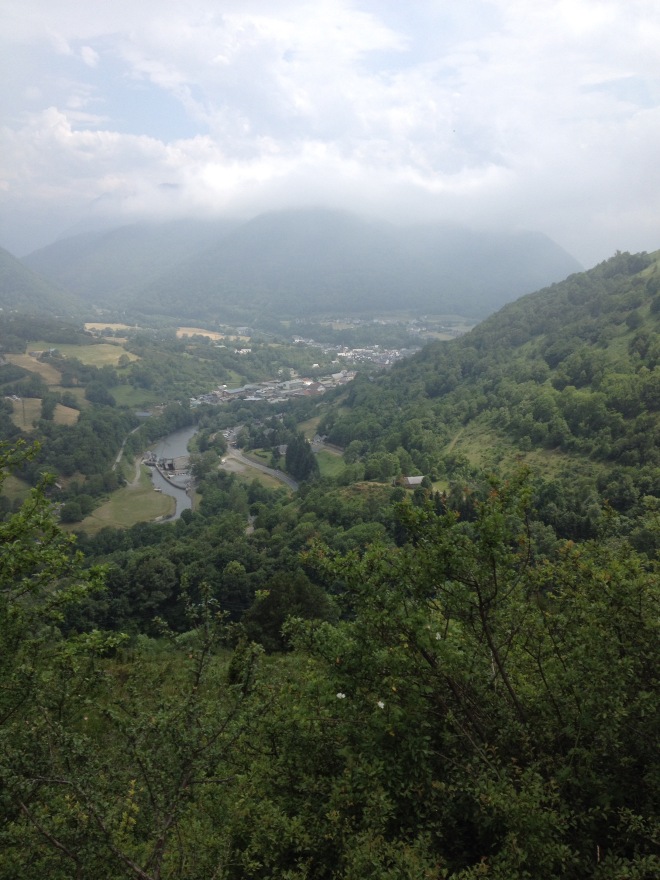 The ride for me today was all about getting into good groups and gives me a good opportunity to explain the feed stop strategy too. There are four feed stops each day at approx 40 km intervals. We see one van at stops 1&3 and the other at stops 2&4. This means we can add or discard clothing depending on conditions, rather than having to be self-sufficient for the whole day. I’ve even got a winter jacket in case I need it! There is always plenty to eat, with lunch at feedstop 3 and coke, chocolate and general sugar rush stuff at feedstop 4 to fuel us home (unless we also stop for an ice cream as some of us did yesterday). We always get a cheerful greeting from Sam and Heidi at 1&3 and from Ian (fellow Welshman – what will happen tonight against Belgium?) and Shim at 2&4. The girls can help sort out injuries for those that need it, though the main work is done back at the hotel. 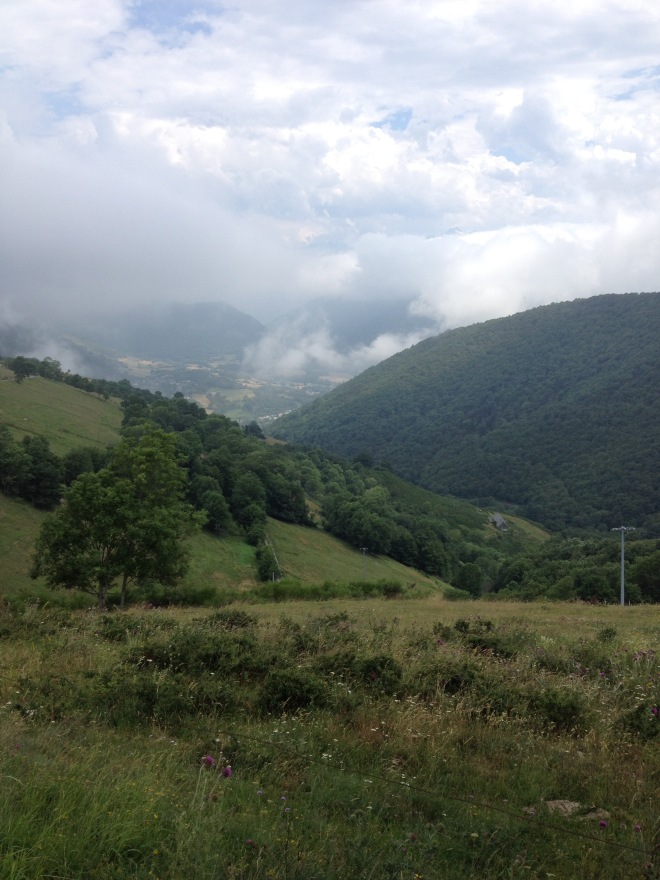 We need to be organised as we need one bag for each van and doubles of everything kit-wise is a good idea. It’s no point having a rain jacket in 2&4 when it is raining at 1 or 3.

The rule is that no-one leaves feedstop 1 until everyone has made it in as  I may have mentioned. Today the long flat run to feedstop 1 was such that we all arrived together. The group of 55 ended up as two even sized trains. Not a group size that works in the lanes at home but which was ok here.

Once we leave feedstop 1 we can ride as we please. Between 1 and 2 I hooked up with Monty and Piers, members of the Wates family and both very strong riders (Hugh Webb will remember them). I was doing my stretches when they left feedstop 2 which was fine, so I hooked up with Scott, Nicole and Windy who were all ready to go when I was. This saw us through to lunch and, as with Monty and Piers, featured excellent group riding and we were really flying along, including a power climb led by Nicole over the cat 4. Great work.  After another excellent lunch, I was ready to go earlier than the others so latched on to another group of 5 for the short 19 km run to feedstop 4, the last before our first cat 1 climb of the tour, the Aspin. This I rode on my own through choice – 12 km at an average gradient of 8%. Unlike the mountains of Stage 5 which had similar averages, this was a steady one with nothing  over 10%. 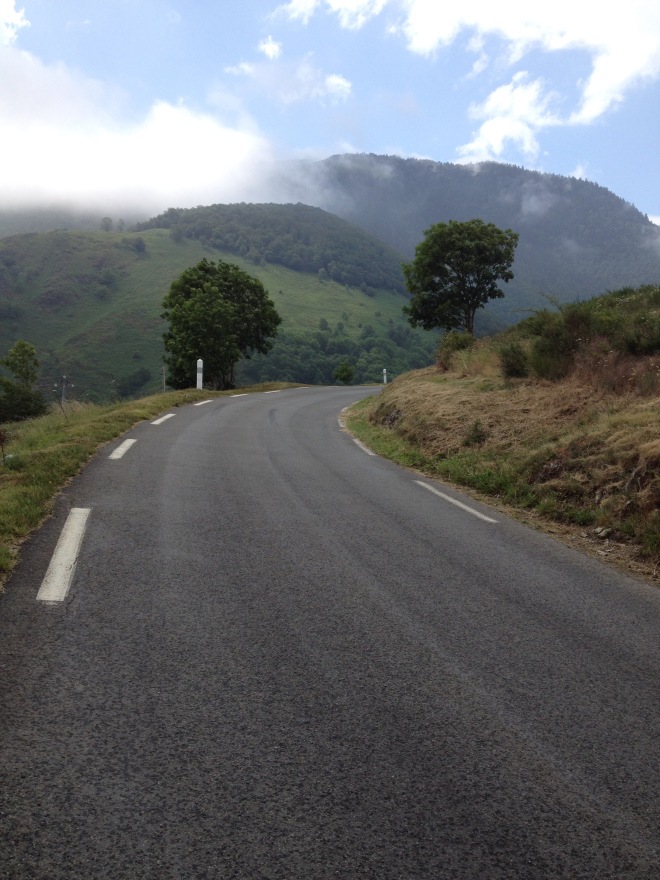 I loved this climb, though could hear the promised thunder in the valley below. It did not rain on me until 1 km from the summit, following which there was a 7 km descent to the finish. Pity those still climbing. It was interesting riding through the cloud and to see the cloud/mist rolling down the road towards me.

I joined the others who had already finished in a cafe at the top and had a hot chocolate while waiting for van 1&3 (and unusually today 5 also) to arrive with a change of clothing – very welcome as we had all got wet. I had cheated by going to the shop and buying a T-shirt and fleece as I did not want to wait, and am very pleased I did. If you think this blog is long today, it is because I  am warm and cosy and whiling away the coach journey to Pau. Makes a nice change from getting it done after dinner when I should really be thinking about getting some sleep!

In other news, wheat fields are giving way to maize and there were just a couple of sunflower fields. Hugh W – I wanted to take a photo for you, but it wasn’t to be. They did indeed bow their heads in awe as we whizzed past!

Will do my stretching exercises later – treatment has made a difference and is an answer to prayer. Felt really strong today.

Up we go. Only one climb today on the Aspin. I’ve climbed this before as part of my Pyrenees costs-to-coast journey in 2014. It’s a beautiful climb. Now I think it’s confession time. Just before I came out, one of my club mates Gerard questioned the gearing I had on the bike – was I really going to use a cassette that only had a lowest gear of 25 when surely a 28 would make more sense? For the uninitiated, the bigger that number, the easier it is to turn the pedals when climbing. It was not until that point that I realised that I had completely overlooked the fact that when the previous cassette had worn out, the bike shop had not replaced like with like, so I thought I was still riding a 28! How unobservant is that! It probably partly accounts for why I struggled so much when riding a stage of the Tour de France last year, though the heat then had a lot to do with that too. Thanks Gerard, you have saved me a lot of pain on the mountain stages we have had so far and in the coming two days especially. I owe you one!