We did not have time to spend in Saumur, which is a shame because one of the local features of note is the vast labyrinth of caves which gives rise to “troglodytisme”. Yes, you too can pursue “la vie en troglo” if you were to purchase a “troglogîte” as, say, a holiday home! We spend the evening in Limoges, famous of course for its porcelain. But it is also known for clafoutis, which is one of my favourite desserts. It’s sort of like a sweet Yorkshire pudding but with fruit in it (cherries, traditionally) and I think each person’s clafoutis comes out differently, just like Yorkshire puds seem to.

We started off being bussed to Saumur for the start of today’s ride, so we did not look back at Angers but got on with the longest stage of the whole Tour.

The ride passed without incident today, though it was the longest of the Tour. It was notable for (1) a bend in the road (it was so straight that this feature was called out from the front of the group as being worth pointing out) and (2) we passed the 500 mile point for the trip. As we are in the Fun Bus, this prompted a chorus from the Proclaimers. Obviously! The other notable thing was notable by its absence – there was a distinct lack of decorations being prepared for the Tour which will pass next week compared with the first two days in the region of La Manche. There’s still time.

Today Paul and Tony chose to join the Fun Bus. They did a sterling job and insisted that they were happy doing all the work on the front and stayed there for about 200 of the 240 km today. For this Tony was given Rider of the Day award by our ride leader Phil. Since I was otherwise struggling to determine who should get the “chapeau” for the day (it was in my gift as the current wearer), that made it easy to decide to give it to Paul for his equally heroic effort on the front.

We had rain on and off for most of the morning but it was a fine afternoon and getting warmer as we headed south. The landscape changed as the day progressed from wide open spaces, to wheat fields, to towns and villages and then finally to beautiful wooded areas and I am going to let the pictures tell the story. 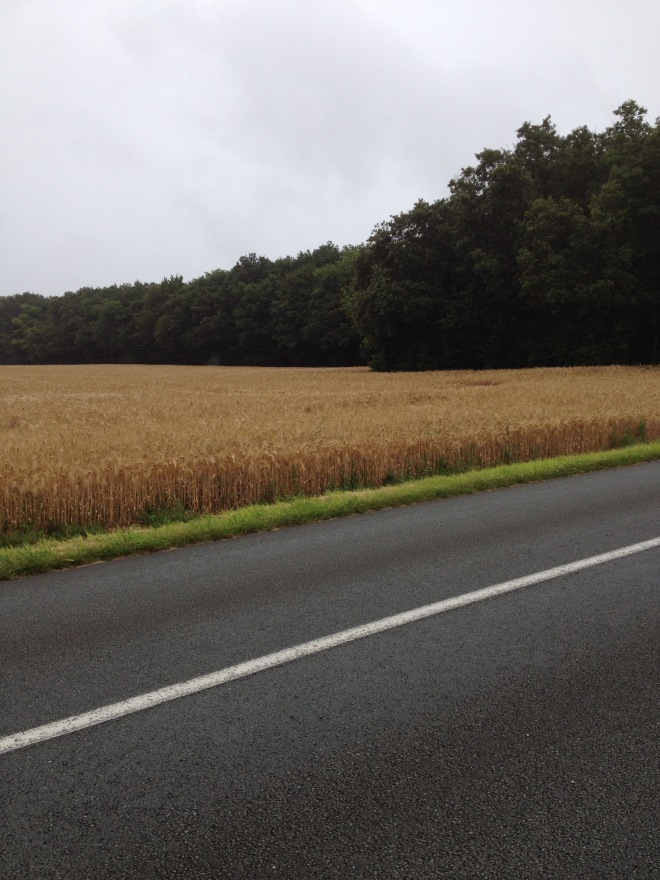 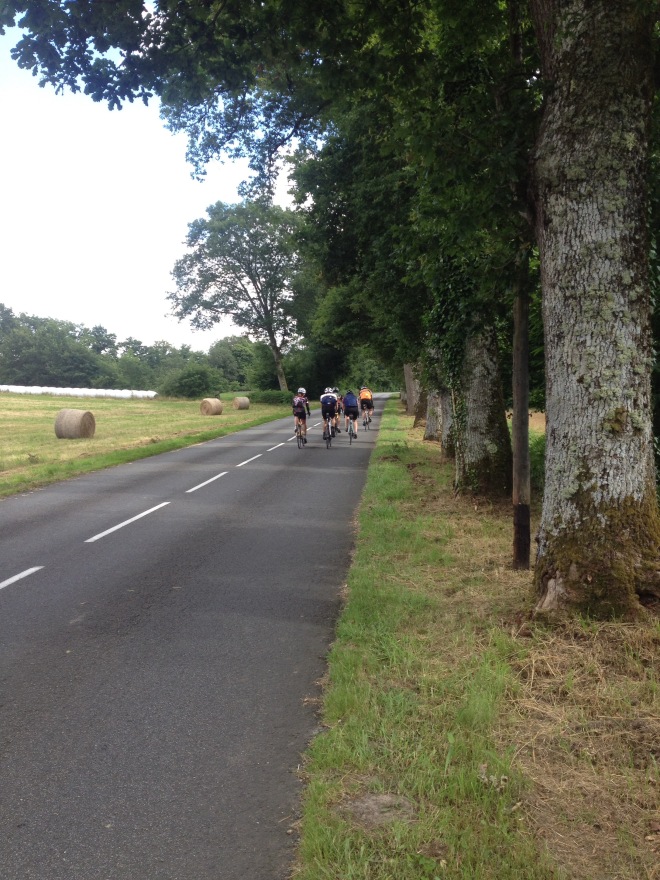 The last “flat” day before we start seeing mountains looming into view, which again we saw from a distance. I’m expecting those to be a challenge after the riding we have already done, but not too daunting as I have ridden there before. But I’m not going to let complacency set in.

I’ve been getting to know people a bit more too. On Day 1 all we really know about each other is that we ride bikes. But none of us are one dimensional so it’s good to have a chat about other things. As I said in my very first blog “my name is John and I ride a bike”, but there are other sides to all of us too – at work I’m one of the bosses and in my choir I’m one of the basses! At the church where I worship the God who has made all this possible for me and more besides, I’m the guy who looks after the money too (so that’s why I always wanted to be an accountant from the age of 14 – it was part of a greater plan!). Mountains tomorrow, which will focus the mind.