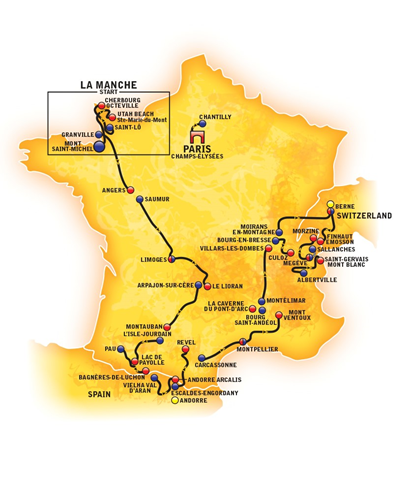 Since 2010 I have really enjoyed riding in the mountains in France. More recently I have tended to add in an extra big climb or two in the days before taking part in an Etape – an event where up to 14,000 amateurs can ride a single stage of the Tour de France a few days before or sometimes after the professionals. It was a case of me making the most of what is otherwise a long journey for a single ride. A cheeky little Alpe d’Huez here, a sneaky little Col de la Madeleine there. And just recently a trip up the Tumble before the Velothon Wales event too.

But my original thought for 2016 was that, much as I love them, I did not need to ride in the mountains this year. The opening stages from Mont St Michel to Utah beach and then from Saint-Lô to Cherbourg looked particularly appealing, largely because of it being a total contrast to the riding I generally do in France I suppose, so that was a definite. Two days would not be enough for me though, so I was looking to add on a few more. How many more I did depended on where the route went from there and what “Tour Tasters” the Tour de Force organisers were offering. Well, there was a great selection but given that I did not have the time to do the whole route, the only way of combining the opening stages with anything else was to ride Stages 1 to 9, which makes me a “semi-lifer” and begging the question “What’s the half-life of a cyclist?” Well after nine days back-to-back riding, covering over 1,100 miles and no rest days, we’ll find out the rate at which I decay! The rides will range from 115 to 145 miles and the elevation profiles will range from sea level at the start of the trip to over 2,200 metres by the time I get to Andorra. The time I am out on the road will vary depending on the stage, the number of feed stops taken and the weather. 10 hours per day may not be an unreasonable average and I am mentally prepared for this, which is a big part of being able to meet the challenge.

In summary, after those two opening days there will be two long flat stages heading south, then a “medium mountain” stage in the Massif Central followed by a day of more rolling terrain in the South West of France. Then follows three days of “high mountains” – the Pyrenees. Day 7 will take in one major climb with the last two days each featuring over 4,000 metres of climbing – together that’s about the height of Mount Everest! I’ve done these sorts of demanding rides before, but never two consecutively. And especially not after having been softened up by a week of long rides beforehand.

In the picture above you can see my route heading down the west side of France. I’ll be returning home while the “lifers” will be heading back into France from Andorra and then turning east towards Mont Ventoux, Switzerland and the Alps and then finishing in Paris.

One thought on “4 Route profile”